From April 12-18, 2015 is National Library Week. What better way to celebrate than taking young children to a library to pick out and read some great books about libraries and librarians? Then stop back on Thursday April 16, 2015 for Teen Literature Day. 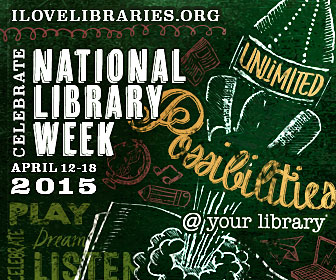 Get ready to your trip to the library with these beginning readers:

by Dee Ready show children that librarians help us learn. Beginning readers learn about a librarian’s tools, workplace, and role in the community.

Let’s Go to the Library (Wonderful World of Reading)

by Martha E. H. Rustad shows youngsters what libraries have to offer.

Libraries have changed through the ages, but there is a common thread of dedicated individuals who want to share books with others.

by Susan L. Roth, Karen Leggett Abouraya and illustrated with collages by Susan L. Roth is based on events that occurred in January 2011 during the nationwide protests in Egypt. As crowds streamed by the library during the protests, there was a spontaneous demonstration of support for the Alexandria Library.  Some people were concerned there might be looting or worse. Instead, some of the protesters broke away, joined hands, and formed a human chain around the library to protect it. To them, the contents of the library represented freedom, a freedom that deserved protection.

In addition to the collage illustrations, the book contains a two-page spread of photographs of the library, the protesters, and the human chain. The notes in the back explains how author/illustrator Susan Roth has a personal connection with Egypt through a friend and had visited the library prior to 2011. She also facilitated a Skype sessions between students in the U.S. and Egypt (see more at the website). In the back matter she explains the connection of the new library to the ancient Great Library of Alexandria, which was burned down in 400 CE. She is obviously very passionate about this.

Hands Around the Library: Protecting Egypt’s Treasured Books is a great way to start conversations about libraries, but also many other topics as well. Delve into it today!

by Barb Rosenstock and illustrated by John O’Brien reveals Thomas Jefferson’s early obsession with books and his contributions to the Library of Congress (see previous review.)

by Jan Pinborough and illustrated by Debby Atwell chronicles the life of one woman who helped change the policy of not allowing children in the libraries. She not only allowed children inside, but also created separate children’s rooms filled with child-friendly books and activities to welcome them and encourage them to come back (see previous review).

by Heather Henson and illustrated by David Small is a tribute to the Pack Horse librarians who delivered library books to rural areas via horseback during the Great Depression.

Cal’s sister likes to read, but Cal doesn’t see the point in it. That is until “that book woman” keeps showing up, even in the worst blizzard. Maybe he should give it a try.

In researching this book I found people who complained that it was written in dialect. It seems that in our modern world of television and the Internet, children don’t hear regional dialects as often and don’t know how to respond to them. I thought it was interesting that the author incorporated subtle changes in Cal’s speech as he learned to read.

Miss Dorothy and Her Bookmobile

by Gloria Houston and illustrated by Susan Condie Lamb is a fictional picture book based on a true story. Dorothy wants to be a librarian, but when she goes with her husband to North Carolina she finds there isn’t a library. That doesn’t slow her down and soon she has raised enough money to buy a bookmobile. The book concludes with letters from patrons who benefited from her dedication to books.

by Pat Mora and illustrated by Raul Colón is the heartwarming story of a young boy whose parents are migrant workers. He is welcomed to the library in a small town in Iowa by a kind and considerate librarian and learns the joy of reading books. Based on the real life story of Tomás Rivera, who grew up to become the chancellor of the University of California at Riverside.

Be sure to check out these eight great books to get children excited about libraries. Do you have any suggestions for the list?

Disclosures: These books were from my local public library. I am an affiliate with Amazon so I can provide you with cover images and links to more information about books and products. As you probably are aware, if you click through the highlighted title link and purchase a product, I will receive a very small commission, at not extra cost to you. Any proceeds help defray the costs of hosting and maintaining this website.